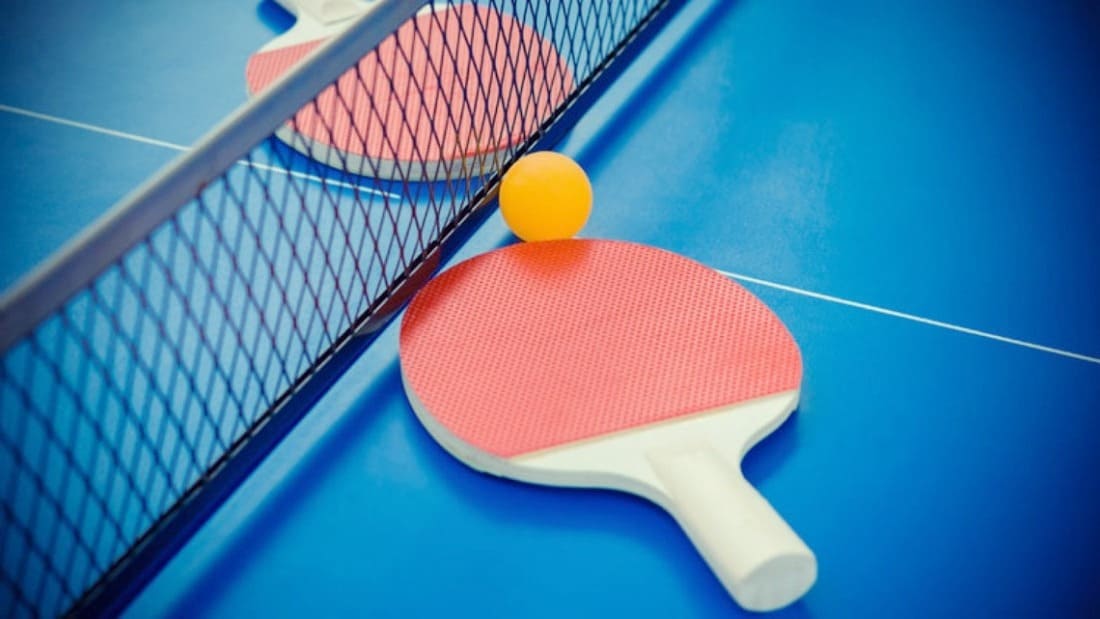 Table tennis (also known as ping-pong) is, of course, a sport for everyone – anyone can play it anytime. It is especially healthy for developing vigilance, hand and eye coordination.

Table tennis players either can put intense force on the ball to make it difficult to return or predict or try to maneuver the opponent at the table – hoping to discover the chance to win a point. But the real joy of the game is its simplicity, requiring very little in terms of equipment, which makes it a very accessible sport.

According to the rules, this popular game is played by 2 (singles) or 4 (doubles) players, usually indoors. Opponents should stand face to face and hit a small ball with a wood and rubber racket, the length of which should be over 6-inch (15.25 cm). The net for table tennis has to be stretched in the middle of a table, with parameters of 9 x 5 feet (274 cm x 152.5 cm).

A pimple rubber cover was developed for the racket in 1903 and allowed the evolution of rotation on impact. Since 1926 the World Championships have been organized. The Japanese introduced a sponge racket in 1952.

However, it is not officially used for a little while due to becoming a certified trademark. Firstly table tennis made an appearance in the second half of the 19th century and was aimed to minimize indoor tennis.

A plastic ball makes a dull sound; as a result, “ping-pong” is a popular name for this game.

Canadian Table Tennis organization, abbreviated as TTCAN, is a member of the ITTF North America, managed by the International Table Tennis Federation (ITTF).

TTCAN is a non-profit organization responsible for the growth and promotion of table tennis in Canada from the very beginning. It carries out sanctioning, cataloguing and processing of tournaments across Canada. It manages the national ranking system and monitors the Canadian National Program.

Table tennis attracts a broad audience around the world. There are more than half a billion viewers at the 2016 Olympic Games held in Rio. The International Tennis Federation (ITTF) includes 222 national associations around the world.

The Canadian Table Tennis Association was founded in 1929. Quebec became a founding member of the province, and Ontario joined it five years after. A long partnership with the Canadian National Exhibition started in 1936. That year the organization held the first Canadian Table Tennis Championships. CTTA uses a ranking system that enables any player competing to be ranked at both the provincial and national levels.

Paul Chapdelein and J.J. Desjardins were some of the first Canadian stars in table tennis during the 1930s. Later, in 1970, Violet Nesukaitis from Toronto became an international player. Having won 4 North American Open Championships in 1971, Violet went to China as part of the Canadian table tennis team. Nesukaitis took 3rd place among female players in the Commonwealth in 1973. She ended her career in the year of 1976.

It was the first team of table tennis invited to China.

After this, Canadian table tennis has undergone significant changes. In the 1990s, it was dominated by two new immigrants – Johnny Huang and Cheng Liquan. They both ranked first in the world’s top ten tennis players. Johnny and Cheng represented Canada in the 1996 and 2000 Olympics. In 1996 they showed their best results in Atlanta; Huang beat No. 1 seed and defended the Olympic champion and managed to come fifth in men’s singles overall; Lijuan took ninth place.

The ITTF World Tour is organized by the International Table Tennis Federation. Many players seek to participate in it, as it is the most prestigious competition in the sport. It includes qualifiers and live tournaments of these competitions.

In addition to the ITTF World Tour, players have the opportunity to participate in some other competitions, which are held at the continental level: North American, European, Asian, Latin American, African, Oceanian, Arabian Championships. Other fairly well-known competitions also include the Pan American, Commonwealth and Mediterranean games.

You may not have heard of these gifted athletes unless you are a table tennis fan. To showcase the impressive achievements of these five Canadians in table tennis, we have included them in this list.

Eugene Wang debuted at the 2012 London Olympics, right after he received Canadian citizenship. Wang had a chance to represent Canada again in 2015, and he brought home two bronze medals from the Pan American Games. Eugene was Canada’s only representative in men’s table tennis at the second Olympic Games in Rio in 2016.

In 2018, Van represented Canada in the Commonwealth Games, reaching the quarterfinals among singles. Eugene Wang received two medals at the 2019 Pan American Games in Lima. He won a gold medal in mixed doubles with Mo Zhang and got a second consecutive bronze medal in men’s singles.

Wang Eugene achieved another success in 2020. He managed to qualify for the upcoming Olympics. He competed for the right to participate in the men’s singles. At the same time, he also qualified for the mixed doubles event. He was accompanied by Zhang Mo, about whom we’ll talk a little bit below.

In 2012 Andre Ho took part in his first Olympic Games. Andre performed in men’s singles and closed ninth in the men’s team classification with Yevgeny Tsang and Pierre-Luc Ginze.

After winning the first table tennis tournament in North America and beating Canada’s Pierre-Luc Ginze in the men’s five-match final, Andre Ho qualified for the 2012 Games in April.

At the age of 8, he started playing in a local table tennis club, of which his father was a member. He started formal training at the age of 10. He was ranked number 141 in the ITTF world ranking, leading the Pan American Games 2019. Today he ranks 156th in the world ranking.

Zhang Mo is a native of China who, at present, represents Canada in the international tennis competitions. She participated in the Summer Olympics in 2008 and reached the third round in singles tennis.

After winning the 2011 Pan American Games in Guadalajara, Mexico, Zhang Mo qualified for the 2012 Olympic Games in London. She also won a bronze medal with Anci Luo at the 2014 Commonwealth Games in Glasgow and was officially included in the Canadian Olympic team in June 2016.

As mentioned earlier in 2020, Zhang Mo, along with Wang Eugene, qualified for the Olympics, allowing her to qualify for the women’s singles as well as the mixed doubles competition.

Alicia Cote participated in the World Championship for the second time. Before that, she appeared in 2015. In addition, she was named the youngest player in the 2015 Pan American Games and spent her time in Budapest preparing for the Pan American Games held the next year in Lima, Peru.